ROHINA MALIK  is a critically acclaimed playwright and solo performance artist. She is a resident playwright at Chicago Dramatists, and an Artistic associate at the 16th street theater.   Rohina’s plays The Mecca Tales and Yasmina’s Necklace, were both nominated for a Jeff Award for Best New Work.  Her one woman play, Unveiled has been produced at the 16th Street Theater, Victory Gardens Theater, Crossroads Theater, Brava Theater, Voyage Theater Company, and Silk Road Rising.  http://rohinamalik.weebly.com

KIM SCHULTZ is an author, actor and refugee advocate who occasionally runs off to Mexico to run an artist residency on the Caribbean. She has performed on many local and national stages, has written two solo shows and recently published THREE DAYS IN DAMASCUS (Palewell Press, 2016), a memoir about falling in love with an Iraqi refugee. Kim loves stories and how they shape our memories and lives. She blogs, tweets and can be generally found at www.kimschultz.net
​
SUSAN STONE, storyteller and teaching artist, has traveled all over this country, as well as to Poland, telling Jewish tales--Chasidic, folkloric, and personal-- for adults and children, at schools, synagogues, museums, and festivals.  Her CD’s have earned Parents’ Choice Gold and Storytelling World Awards.  Former adjunct faculty at National-Louis University, she is Founder/Co-director of the Evanston Public Library Storytelling Festival, Oct. 6-8.  www.susanstone-storyteller.com

Our musician is LUCIA THOMAS. Lucia is a violinist/multi-instrumentalist and arts organizer. She has traveled all over the United States, Europe and Mexico, playing professionally with various musical ensembles. She is artistic director of the Chicago Folklore Ensemble, which celebrates immigrant communities in the United States by performing dynamic arrangements of stories and songs learned directly from immigrants. Their recent book and CD have been featured at TEDxUChicago, WBEZ, and they continue to perform on stages throughout the Chicago area. 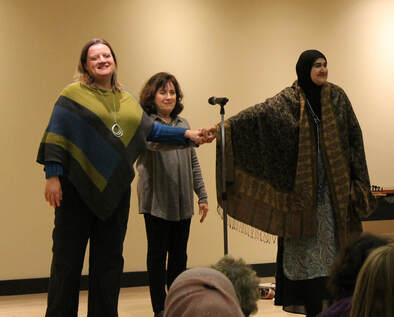